How a 3-Way Wall Switch Works

Light switches are simple in design. Current flows through a switch to the load, such as a ceiling light. When you flip the switch off, it breaks the circuit and interrupts the flow of electricity. A basic light switch has two terminals and sometimes a ground terminal. The hot wire from the power source is connected to one of the terminals. The hot wire going to the load (such as a light) is connected to the second terminal. A 3-Way switch is different in two ways. First, it has one more wire connected to it, and second, instead of being on or off, it switches which wire it routes the current to.

A three way circuit allows you to operate a fixture or outlet from two different locations. You must use two switches and both switches must be a 3-way switch. A standard switch simply breaks or makes a circuit, it is either “on” or “off”. A 3-way switch routes the current down one of two wires called travelers. When both of the two switches make contact through the same traveler wire, a circuit is made. This is how each 3-way switch can, at any time, turn a circuit on or off. Each switch can reroute the current to make or break the circuit. 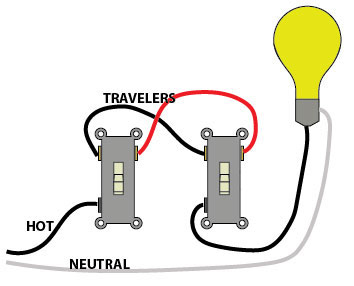 Do I Need to Replace my Light Switch?
When a light switch fails, symptoms can include a loose or wobbly switch or it may be stiff or difficult to push. Lights that flicker may indicate a switch that is shorting. A switch that has failed completely will fail to turn on or in rare cases fail to turn off a circuit. With a 3-way switch circuit, one switch may fail but the other switch continues to work. However, identifying which switch has broken is not always obvious. If both 3-way switches are the same age, it may be worthwhile to replace them both at the same time.

If you do need to replace a wall switch, it is fairly easy to do yourself. Here is an article：
Steps to replace a wall switch
1.Turn off the power at the circuit breaker or fuse box.
2.Test the circuit to make certain the electricity is turned off at the breaker.
3.Remove the cover plate.
4.Remove the retaining screws at the top and bottom of the switch.
5.Pull the switch straight out from the box.
6.Note the position of the wires and transfer them over to the corresponding terminals on the new switch. To avoid making an error, instead of disconnecting all of the wires from the old switch, transfer one wire at time to the new switch.
1.We recommend using the screw terminals instead of the slip connectors found on the back of some switches, because wires are more prone to coming loose from slip connectors.
2.If the wire is stranded, twist the strands together.
3.Create a “U” shaped loop of bare wire about 1/2″ long.
4.The screw tightens in the clockwise direction. Hook the loop under the terminal screw so that tightening the screw pulls the wire tightly under it, rather than pushing it out.
7.Wrap electrical tape around the switch so that the exposed terminal screws are covered. This is a safety precaution to reduce the risk of shorts, arcing and shocks.
8.Gently fold the wires into the box as you push in the switch.
9.Secure the switch at the top and bottom with the retaining screws.
10.Replace the cover plate.
11.Turn on the power at the breaker or fuse box.
12.Test the switch.

If the circuit breaker trips or fuse blows when you turn on the switch, the most likely cause is one of the wires is shorting against another wire or the metal box the switch is in. In the case of a 3-way switch, mis-wiring any of the wires could cause the breaker to trip or fuse to blow.